Rio On Location: Christ the Redeemer 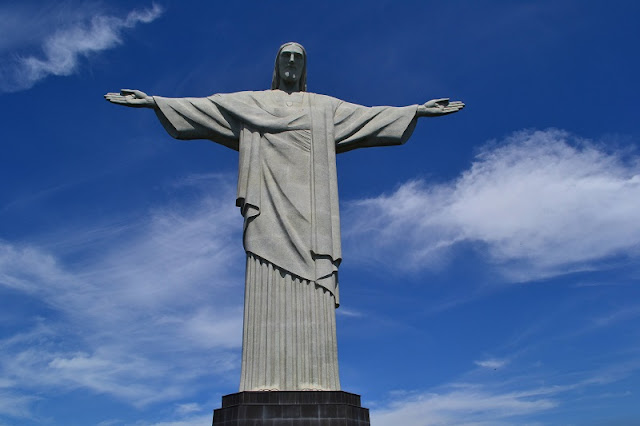 One of the New Seven Wonders of the World at the Service of Cinema Photo: Fran Mateus It is one of the most worldwide famous images of Brazil, and a trademark of the country. Open-armed, the statue protects the city while looking straight at the most beautiful view there is – the Sugarloaf hill, known in Portuguese as the Pão de açúcar . Christ the Redeemer was elected, quite understandably, one of the New Seven Wonders of the World. Its silhouette is so impressive that movie directors shot it in their Brazilian productions. Movie scenes from different decades are listed below for you to admire the statue’s majestic image from the perspective of movie stars on their real or fictional journeys to the city of wonders. Now, Voyager (1942) On board a luxury transatlantic liner headed for Rio, Charlotte Vale (Bette Davis’s character), a rich young lady who is in treatment for her chronic shyness and dependence on a domineering mother, is delighted by the image of Christ the R
Postar um comentário
Continue lendo ...

Credits: Eon Production In Moonraker (1979), the British spy James Bond (played by the amusing Sir  Roger Moore) investigates the millionaire Sir Hugo Drax (Michael Lonsdale), who is involved in the hijacking of a space shuttle called Moonraker. After having been to California and Venice, Bond arrives in Rio de Janeiro, following leads that might reveal the intentions has Drax Industries for the shuttle. Bond works side by side with the American scientist Dr. Holly Goodhead (Lois Chiles ), while Jaws  (Richard Kiel), one of Drax’s hit men, known for his metal teeth, tries to stop them. Credits: Eon Productions Once he starts assembling the pieces to this puzzle, Bond finds out that Drax is not too happy with the evolution of mankind, and has created his own plans for changing the fate of humanity. The multimillionaire recreates what Bond calls “Noah’s Arch operation" ”: inside his spaceships he carries one male and one female of unquestionable beauty. His idea is
Postar um comentário
Continue lendo ...

Rio On Location: the Selarón Staircase in The Incredible Hulk 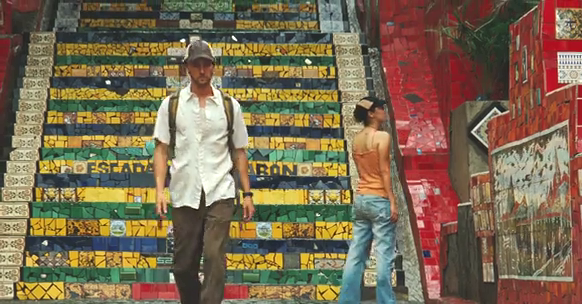 Credits: Universal Pictures In “The Incredible Hulk” (2008) Doctor Bruce Banner, better known by set jetters  and Marvel comic book readers as Hulk, leaves the neighborhood of Santa Teresa by descending the Selarón Staircase, composed of the most colorful, international and famous steps in Rio. Banner is headed for the Rickyson  Gracie martial arts school, where he takes classes on learning to control the anger that transforms him into the terrifying green monster. Photo: Fran Mateus The Selarón staircase marks  the limit between Santa Teresa and Lapa. People from all over the world go there to see the curious work made by the Chilean artist, Jorge Selarón. Its 215 steps are covered in a tile mosaic of a multitude of colors, brought from all over the world – most of them were donated to him. The work began in 1990 and Selarón stated that it would only be done on the day he died, which means that the emblematic staircase was concluded on January 10, 203 (Rua Teotônio R
Postar um comentário
Continue lendo ... 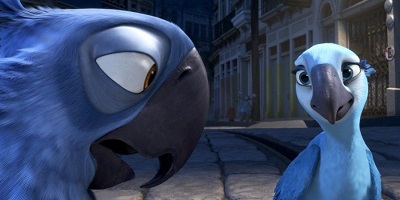 Credits: Fox Animation Rio (2011) is one of those computer animations that will put a spell on you. Its main characters, Blu (voice by Jesse Eisenberg) and Jewel (voice by Anne Hathaway) are considered to be the last blue-macaws in the world, and they are responsible for making the movie so adorable. Blu was born in Rio de Janeiro, but at an early age went to live in Minnesota, in the United States, where he picked up some – let’s say – “human” habits. On a beautiful sunny day, he returns to his home town to meet with Jewel. The journey is planned for them to ensure the survival of their species for generations to come, though the young bird has yet to find that out. After arriving on Brazilian land, the couple ends up being kidnapped by wild animal smugglers. Blu and Jewel escape captivity and search for a means to get rid of their handcuffs. On their way – filled with stunning natural and urban landscapes, as well as a view of the favelas – they meet birds who are willi
Postar um comentário
Continue lendo ...

Rio On Location: Lapa in Breaking Down – Part 1 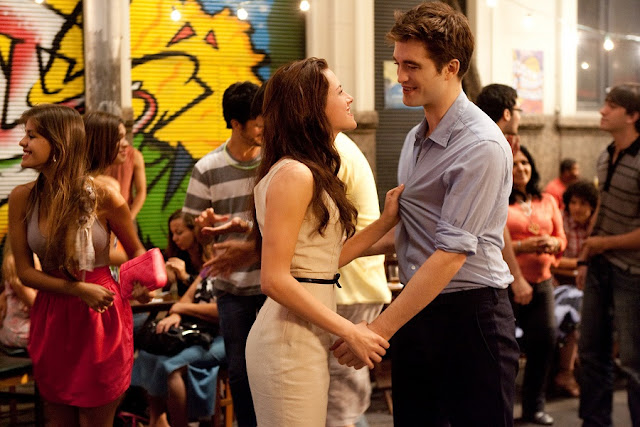 Credits: Summit Entertainment Teenagers – and some adults as well – from all over the world adore the Twilight series. However, both adolescents and grown-ups are sure to agree on the pleasures of simply enjoying life – which is precisely what the couple Edward Cullen (Robert Pattinson) and Bella Swann (Kristen Stewart) did on their short visit to the carioca nightlife. Before going on the vampire ride through the nightlife of Rio, let’s take a step back and remember the movies of the series. They are a movie adaptation of Stephenie Meyer’s novels, which portray the ups and downs of a love story between a young mortal girl and a handsome vampire. It all begins with Twilight (2008), in which Bella moves in with her father in the small and rainy town of Forks (Washington, USA) and meets the mysterious Edward. They begin dating, but in New Moon (2009), Edward decides to break up with Bella, since he is aware that their relationship is a danger to her life. In Eclipse (2010)
Postar um comentário
Continue lendo ...

Rio On Location: Brazilian Carnival in the movies 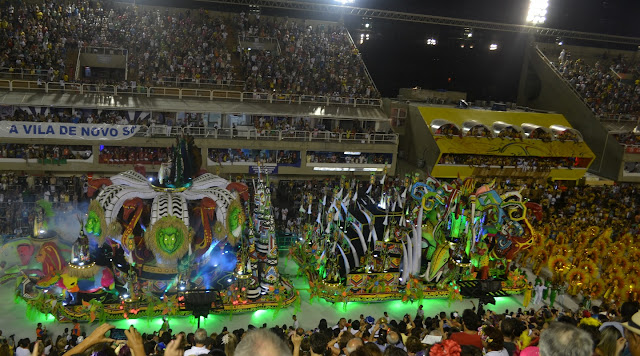 Photo: Fran Mateus The Brazilian Carnival (known simply as Carnaval in Brazilian Portuguese) is a luxury-filled, colorful and incredibly creative party. Over time, it has become popularly thought of as the biggest show on Earth. If, before traveling to Rio you would like to learn more about the evolution of this festival, my advice is to go on a tour through four movies that registered the party in different moments of history: It’s All True (a documentary with scenes from 1942), Black Orpheus (a 1959 drama), 007: Moonraker (a 1979 adventure film), and Rio (a 2011 computer animation). The first three portray the Carnival from the perspective of foreign directors, all of which were great admirers of the party; the latter, on the other hand, was directed by the Brazilian Carlos Saldanha, and offers a view into twenty-first century carnival parades. Credits: RKO Studios - Paramount Orson Welles was one of the first movie industry gringos to show up at the event. For sh
Postar um comentário
Continue lendo ... 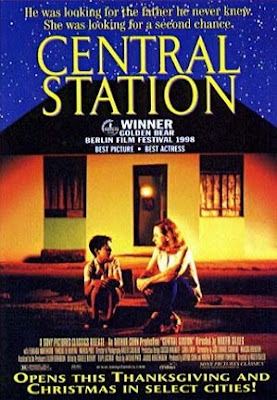 A new day breaks at Central do Brasil and, as usual, the train station is taken over by the crowd. People arrive from all over Rio and beyond. Many are just on their way to work, others are looking ahead to a day of leisure and, for some, the train station itself is their everyday office. Dora (Fernanda Montenegro) is a member of the latter group. She arrives, sets up her little desk with her work material – paper, envelopes and pens – and begins her workday: writing letters for the illiterate who wish to get in touch with friends and family living in other parts of the country. Then one day, two people come looking for Dora: Ana (Soia Lira) and Josué (Vinícius de Oliveira). Ana wants to makes some changes in a letter she had asked Dora to write to her son’s father, stating that the boy would like to meet him. Josué’s smile leaves no doubt as to his desire. As soon as they leave the station, Ana gets run over by a bus and dies. Just nine years old, with nobody to go to, Josué
2 comentários
Continue lendo ... 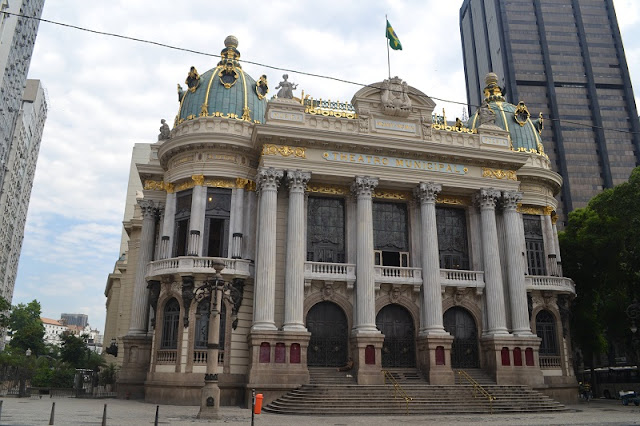 Photo: Fran Mateus The façade of Rio’s largest theater hall makes an appearance in Alfred Hitchcock’s Notorious ; but it is in the movies Moon over Parador , and Rio, I Love You that the indoors of the theater finds its spot on screen . Moon over Parador (1988), directed by Paul Mazursky, stars Richard Dreyfuss, Sônia Braga, Raul Julia and Fernando Rey. In the story, Jack Noah (Dreyfuss) is an actor finishing playing his role in a movie set in the fictional town of Parador, when suddenly, Alphonse Simms (also played by Dreyfuss), the local dictator, dies from a heart attack. Noah is sought out by Roberto Straussmann (Julia), the politician’s right-hand, and Straussmann makes him “an offer he can’t refuse” (very Godfather -esque – Francis Ford Coppola’s 1971 movie). Because of the physical similarities and his capacity for imitation, Noah is “invited” to substitute the deceased before the people of the city, so that Straussmann can keep the power to himself. Photo
Postar um comentário
Continue lendo ...
Mais postagens